Posted on October 26, 2012 by sarahbakerstories 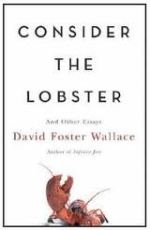 Believe it or not, Maine’s main export is not lobsters.[1][2] But Maine is known as “vacationland” and lobsters bring the tourists in. So in the summer of 2003, Gourmet Magazine sent the writer David Foster Wallace to investigate the ground zero of lobsters, the Maine Lobster Festival, MLF, in the heart of the midcoast region. One would imagine the article would be a paean to lobsters and the beauty of the Maine coast. After all, Gourmet (now defunct) was a fantasy magazine for foodies and travelers. But Wallace, a not-so-closeted moralist and master of erudition and rhetoric, took the reader on a different journey. One in which their taste buds had to confront[3] their consciousness.

“Consider the Lobster,” starts out as a breezy tour of the picturesque Penobscot Bay in late July. We learn the taxonomy of a lobster and its evolution from poor man’s slop to rich man’s delicacy. We discover lobster migration patterns, their water temperature preferences, and the difference between those with hard and soft shells. Our mind wanders to a summer meal of lobster dipped in garlic, lemon, butter sauce and the smell of warm homemade blueberry pie. Our collective mouths begin to water.

Then Wallace enters the Main Eating Tent of the festival and his carefree tone begins to shift. Now he’s noticing the “Disneyland-grade queues,” the noise from “crackling, chewing, and dribbling,” and the Port-O-San facilities with no place to wash your hands. Our mouths are watering less and we’re wondering where we might have left those sanitizing wipes.

But then Wallace’s tour lulls us back into our summer reverie with dreams of cracking open a lobster claw and savoring its succulence. But he spies the World’s Largest Lobster Cooker and poses the question, “Is it all right to boil a sentient creature alive just for our gustatory pleasure?” After all, a not so publicized fact Wallace points out is that lobsters, unlike other animals, are cooked alive.[4] Now the story turns to the cooking methods of these crustaceans.

With details of the lobster’s “stresses of captivity” and its “rabbit-like-death-scream” when plunged alive into boiling water, Wallace collides[5] headfirst into his PETA[6] alter ego. And we, the reader, are plunged into the murky ethical considerations of eating lobsters. Now, we’ve lost our appetite and vow to consider the vegetarian option the next time we’re at a restaurant.

This is vintage Wallace. He’s a moralist, a fire-breathing preacher of consciousness. “Wake up people!” you can hear him screaming from his pulpit. “Be conscious about your decisions! Don’t just eat those lobsters! Think about them! Think about your actions! Consider the Lobster!!”

Wallace worries about his tone and that he might “come off as shrill or preachy when what I really am is more like confused.” After all, he’s a meat eater and wants to continue with his carnivorous diet. But he wants to make sure that he and the readers of Gourmet, “The Magazine of Good Living” as he says, are mindful of their choices and not reacting in a “hard-wired way.

Consciousness-raising is Wallace’s hard-wired way. As he said in a New Yorker profile, “This is a generation that has an inheritance of absolutely nothing as far as meaningful moral values, and it’s our job to make them up.” But as he noted in his “This is Water” commencement speech at Kenyon College in 2005, “It is unimaginably hard to do this, to stay conscious and alive, day in and day out.” But try he does. In “Consider the Lobster,” he prods us to think about what’s at the end of our fork.

Wallace who died at age 46 in 2008[7 is believed to be one of the greatest writers of his generation. He won a MacArthur “genius” fellowship and other awards and has been described by critics as both “a contemporary American master” [8] and a “snowboarder with a PhD”[9] His writing is precise and intellectual yet humorous. He strikes a balance between the personal and the reportage. He’s also the re-inventor, or re-invigorator, of the footnote. Those typically dull representations of academic writing come alive in Wallace’s capable hands.

In “Consider the Lobster,” it is in his footnotes that his tone finds its bully pulpit. These footnotes, more like riffs, are where Wallace questions, opines, and meanders. They are essential to the story. These morsels often contain his main point and in this essay sometimes fill up half a page. They are trademark Wallace and he described them to interviewer Charlie Rose as “reflect[ing] his perception of reality without jumbling the entire structure.”

This structure allows him to report on the topic, lobsters, in a detached, journalistic manner. But in the footnotes, he connects to the reader through his personal reactions. “They come up alive in the traps, are placed in containers of seawater…” he writes benignly in the body of the text. In the corresponding footnote, he goes into gruesome detail about the inhumane practices in a “standard meat-industry operation” including the debeaking of chickens without anesthetic, the dehorning of cattle, and the clipping of swine’s tails.

These footnotes are also why some critics, including this one, find Wallace both exhilarating and maddening.[10] On the one hand, his intelligence, wit, and penetration of subjects in this article as well as others in his book, Consider the Lobster and Other Essays, is breathtaking. On the other hand, to read one of his essays requires not only a good deal of patience because of these sentence interrupters but a pair of extra-strength magnifying glasses to read them.[11]

Readers respond passionately to David Foster Wallace so it’s no surprise that the amount of letters Gourmet magazine received in response to the original article were record-breaking. In the September 2004 issue, in a section called “sugar and spice,” a reader named Dana N. Wilson wrote, “The article was brilliant, probing, daring, and brutally honest.” The next letter from Shelly Keller asked, “What were you thinking when you published the lobster story? Do you think I read your magazine so you can make me feel uncomfortable about the food I eat? I will never eat or cook another lobster.”

One can imagine Wallace was pleased with this passion. After all, “Consider the Lobster” was meant to provoke. Early in the piece, Wallace describes lobsters as “garbagemen of the sea, eaters of dead stuff.” Three pages later, he writes, “As a tourist, you become economically significant but existentially loathsome, an insect on a dead thing.” It seems that Wallace not only considered the lobster, he also considered the human.

[1] It’s electronic integrated circuits according to the United States Census. But that’s truly unromantic. Can you imagine a lollipop in the shape of a circuit? And I don’t think cuddly, stuffed circuits would sell well. So, despite lobsters ranking of 4th on the Census list, the Maine Tourist Board has elevated their status.

[2] Oh, and a footnote to that footnote: I’m using footnotes in the David Foster Wallace, DFW, style because emulation is an expression of reverence.

[4] He wonders if we would ever kill a cow in public like that or debeak a chicken?

[5] Perhaps he slipped on some butter and skidded into a lobster tank?

[6] People for the Ethical Treatment of Animals

[7] Wallace hanged himself in 2008 after decades of battling depression.

[8] Robert McCrum in the Guardian said this and I’d have to agree. Although, honestly, I haven’t read all the books written by 40-somethings.

[9] That was Peter Grier of The Christian Science Monitor. I think it’s a weird metaphor but it just shows how frothy reviewers can get after reading Wallace.

[10] This ambivalence seems permissible considering Wallace employed it in “Authority and American Usage”. “In this reviewer’s opinion, the only really coherent position on the abortion issue is one that is both Pro-Life and Pro-Choice.” If he can have it both ways so can said reader in analyzing “Consider the Lobster”.

[11] Said reader experienced asthenopia, or eye strain, from reading the piece and this is despite adequate lighting and attractive reading glasses from a pharmacy in Venice, Italy. Oh, but that’s another story altogether.

This entry was posted in Books, Food. Bookmark the permalink.